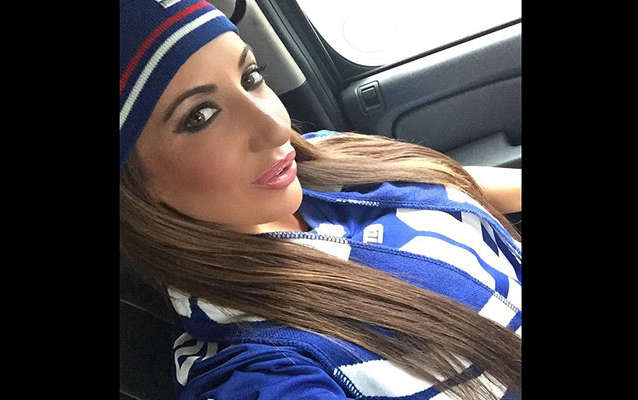 Richelle Ryan has been going to the New York Giants' games since she was only 5 years old. During football season, she is likely to be at Metlife stadium, where the NY Giants play home games.

She is willing to cheer for her favorite football team in freezing temperatures, jump on a plane to attend away games, and even got invited to participate in the Giants' charity basketball game.

We are pretty impressed with the ways that Richelle Ryan shows her loyalty to her football team. Her team spirit will probably make you question your enthusiasm towards your favorite sport's team. Why? Read on.

This is just how she feels during pre-season, FYI.

Lets go Giants!!!! Beat the fucking Jets and show them who the REAL Ny team is #bigblue #NYG #NFL #preseason 🏈🏈🏈

No matter where she goes, she loves to rock her Giant's gear!

She even meals prep with the Giants Tupperware. You can't find that in stores, people.

Monday Meal Prep!!! Diet is key..., abs are made in the kitchen baby 🔪🔪🔪 4oz ground turkey, Asparagus and egg whites #boom #healthiswealth Failing to plan is planning to Fail #wordstoliveby

She's willing to buy and drink Gatorade that is labeled with her favorite sports team's logo.

Even her nails know the deal. Those decorative nails might take a lot of time, but a girl has got to accessorize!

She is willing to travel to away games ACROSS the country to support "Big Blue Wrecking Crew."

On my way to San Diego to watch my Giants crush the Chargers in their own home!!!! I live for this baby!! #nfl #werenumber1 #gameday #footballgirl🏈🏈🏈

She loves to predict football games. She's even been featured in the NY Daily News.

Make sure you grab a copy of the @nydailynews and read up on my football predictions for this season. Of course I'm sportin' my @_udwjpp jersey in true @newyorkgiants_ fashion ❤️💙❤️💙🏈🏈 #bigblue #nynews #footballtalk

And she's SO not afraid to talk smack about other teams, either.

She takes her friends to games...no matter what the weather is like outside.

The giant Giants fan still shows love to ex-players, even if they currently play on a different team.

She gets invited to actually PLAY with the NY Giants Charity basketball games. No big deal.

They are my @newyorkgiants_ for a reason.... @j_alford13 and Eric Dorsey tower over me haha Had a blast today playing in the charity basketball game with them and of course we beat the Cowboys!!! Hahaha #suckonthat

This lady is not afraid to bet on her favorite football team, either.

And is a good sport, even when she loses the bet. Look at her smile in that Cowboy's jersey.

In studio with my girl @thereallisaannxxx for her show Lisa Ann does Fantasy on Sirius XM. We had a bet in place for the game last night.... My @newyorkgiants_ lost so I had to wear Cowboys crap today all over NYC #TheBet 🏈🏈

But of course, like any fanatic she still gets a little sad when they lose a game.

Ugh... Tough loss today, we should have won 👎👎 #stillafan #bigbluetillidie

But win or lose, she's one LOYAL fan.

LOYALTY is everything to me!!! Stay together no matter what #WinorLose #gmen #bigblue 🏈🏈 @newyorkgiants_

Oh....did we mention that she has a tattoo?

Just because I was s good girl 💋 ❤️👠 #redbottomgang #louboutinlove

And she is ALREADY waiting for NEXT season to start.

Let's go @newyorkgiants_ 💙🏈💙 last game of the season... Next year we will be back on top 👍 #NFCEast #gmen #bigbkue

But if there's one thing we can all agree on, it's that Richelle Ryan DEFINITELY bleeds blue, and looks good doing it! 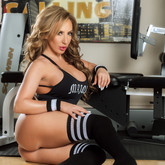 Hey, it's Richelle Ryan! I was born and raised in the beautiful state of New York. I am a red-hot Italian which explains my brassy and outgoing personality ;)

Growing up I went through many stages, I was a tomboy which didn't last very long, then I grew an interest for my mother's make-up and trying on her bras and high heels and posing in front of the mirror.

I love to workout, do hot yoga, go shopping, check out new sushi restaurants and spend time with my friends.

Text or call me and I'll tell you more!